You can see Joe, from Arc, on guitar here – joining in now to the session after listening in for a while from the side, after attending John Doyle’s workshop on the previous morning, after performing the night before with the band, after week’s of rehearsal, after years of practice and listening, after encouragement and example from his family, after generations of the same arc being redrawn time and again, over and over, gently and without fuss.

Singing us all into a sympathetic silence. 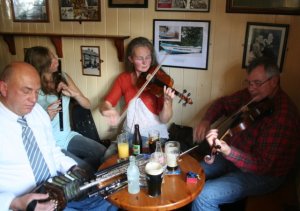 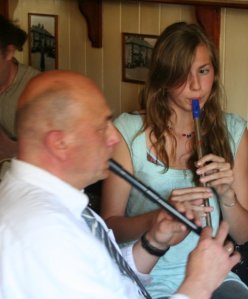 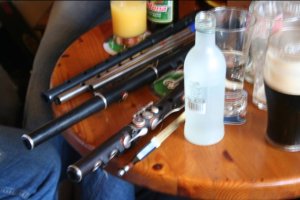 This one is actually a family portrait if you read it closely enough.

And if you didn’t know better, you’d almost imagine the tie was worn for the sake of this picture – what a beautiful parallel line it makes for the flute!

Meanwhile, across the road, Dan’s Thai instrument, a khene, specially made in G for trad, was soaring through a few tunes with a few others lingering like yourself as long as possible before the inevitable departure … 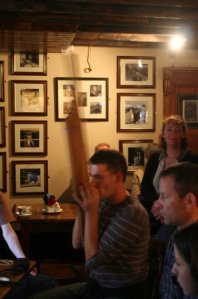 … and Frank was discussing with Eibhlis the finer points of Irene’s French rosin (in French!) …

and out of the blue (to some at least) the wildcard act, bluegrass band, The Tin Box Company, started up a notch or two higher their set in the front bar … 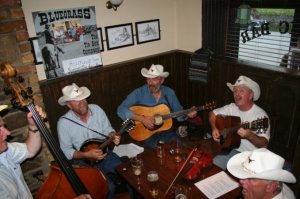 … and eventually it is time to go.

And sure there’s always Ciaran Carson’s book “Last Night’s Fun” for something of the spirit of the thing in words.

(CJ keeps the crowds at bay from the front of Tutty’s. Now, there’s a man if ever there was possessing the appropriate level of respect for the skills and needs of singers. He kept his own name off the list, unfortunately.) 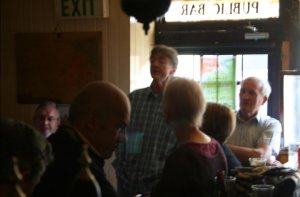 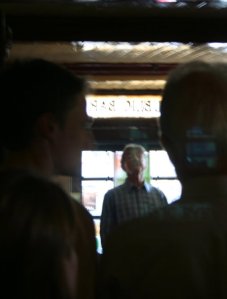 Singing is a very difficult subject to photograph: in pictures, singing might just as well be ranting or yelling or burping – you can’t really tell. What I’ve learned about photographing singing is that the most revealing shots of the singer come from capturing the expressions of the audience listening. 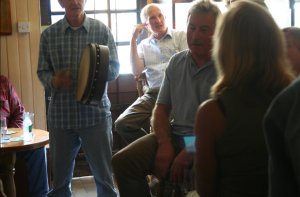 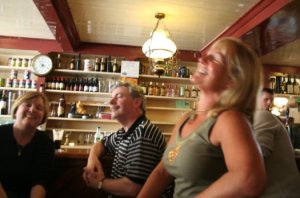 The already infamous (& no doubt banned from RTE!) Amsterdam ballad being sung, and even with some self-censoring there was plenty to make one blush in it … but even more to make everyone laugh and admire the cleverness of the tale and of its telling in sung verse. (It was followed by an homage to that deep and cherished classic ‘Copacabana’ – “At Tamangos, on the Northside … don’t fall in love”!)

(I learned this weekend not to stick your camera through open windows without having first taken off the lens cap: this last picture in this sequence shows the reaction of the audience as living legend, Mr Kevin Conneff, evoked Mr Bean at one point in my fumblings through the window.) 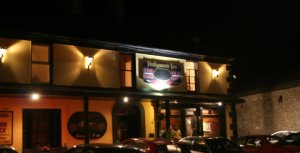 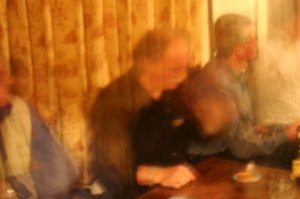 Playing the bones can be a ghostly thing!

Eibhlis giving in utterly to flute temptation some time around midnight on the Saturday, having lasted all of Friday night jittery and even jealous, and only indulging in a spot of whistle playing earlier on Saturday afternoon across in Tuttys, but just cracking here. Exceptional circumstances this weekend, though. 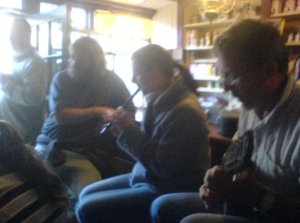 Didn’t have the big camera with me when I popped over in the early evening on Satuday, but caught this moment with the mobile – not just Eibhlis, but Eric getting some strumming in between admininstrative duties.

It was probably going a while by the time the concert goers arrived, cause there was already a kicking feel to it. But when you consider where it got by the end of the night, it was still only really warming up at midnight. The most amazing part of it was to see Liz Carroll herself sitting there among so many admirers, joining in, and then finding others starting up her tunes in a kind of gentle thank you.

Did I count 9 fiddles at one stage? Was that 5 flutes? 2 banjos. Boxes. A drum or two, and bones. And then, John Doyle … yes, John Doyle playing guitar in the middle of it all! 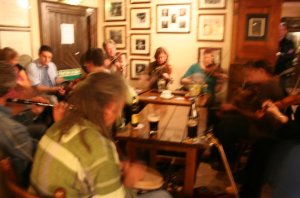 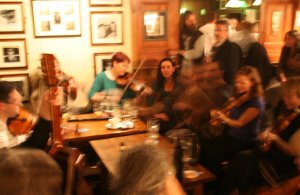 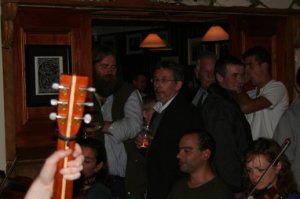 “Is that a mandolin, I see before me?” says Eric. (But he was still too much in admin mode on Friday night to join in.) 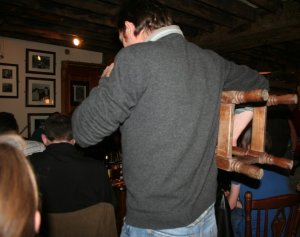 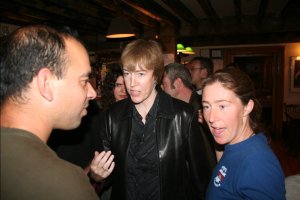 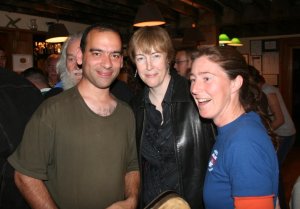 (“I think Bridie has rhubarb up at the house. Come on!”)