We are delighted to announce that after a two year break music lessons are resuming in the Hollywood centre from 10:30am on Saturday April 23rd.

Coming to Music Under The Mountains? If you are attending one or more of our concerts and live in the circle below then we will drop you home! For the second year running we are offering a subsidised shuttle service to ensure you can enjoy your night out and get home safely after! Departure times will be confirmed later in the week. Many thanks to Billy Lenihan who is kindly providing this subsidised service.

Tickets are still available for the festival at musicunderthemountains.com/tickets, book now to avoid disappointment! 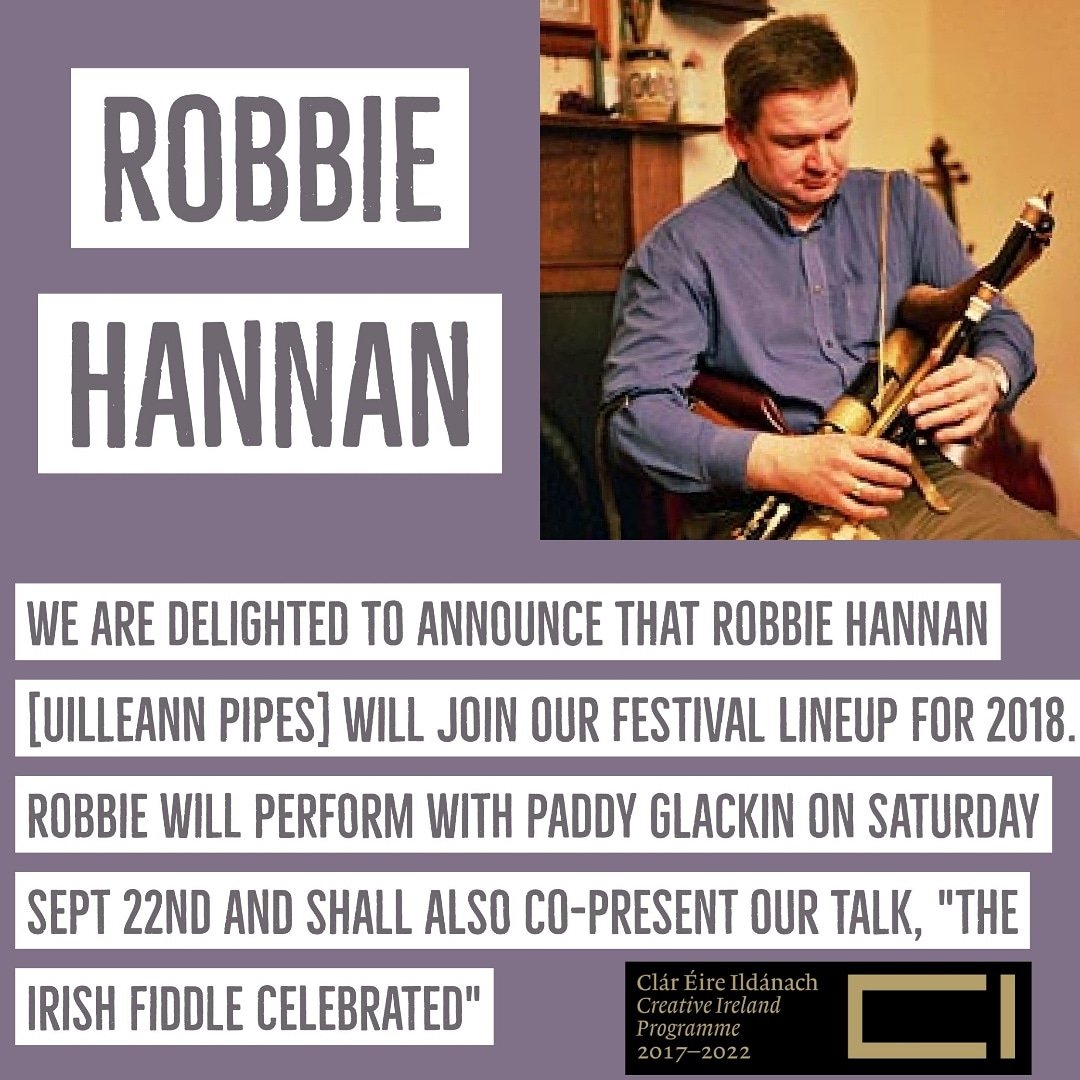 We are delighted to announce that Robbie Hannan (Uilleann Pipes) shall perform on Saturday September 22nd with Paddy Glackin. Robbie has performed with Paddy many times and they have also recorded an album together, “Séideán Sí”.

In addition, Robbie, (a broadcaster and authority on traditional music, particularly the fiddle music of County Donegal), will also co-host our talk on Saturday afternoon, “The Irish Fiddle Celebrated”, with Paddy Glackin.

Robbie is kindly replacing Dermot McLaughlin, who due to circumstances beyond our control is no longer in a position to perform.

Paddy & Robbie will be joined on Saturday night by Seán-Óg Potts (Uilleann Pipes) & Paul McGrattan (Flute), this will be a superb night of music that we hope you can all join us for!

Music Under The Mountains are delighted to welcome two giants of Breton Music to Hollywood for an intimate performance in St. Kevins Church of Ireland, Jean-Michel Veillon & Yvon Riou. 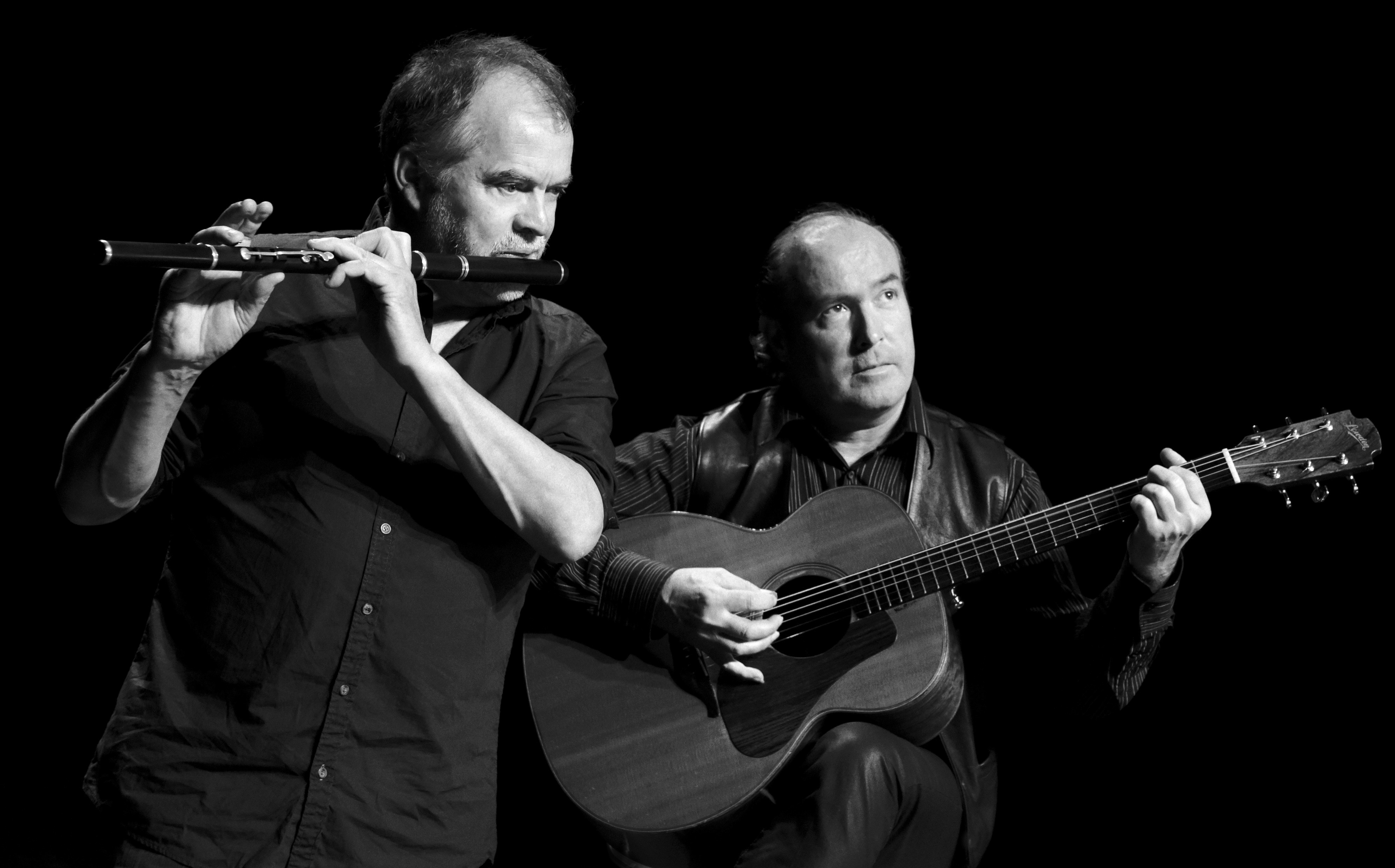 Born on the north coast of Brittany, Jean-Michel Veillon was first a dancer and then a bombard* player in his teens. He then started to play the transverse wooden flute, getting his first influences from various Irish flute players, but then created distinct articulation techniques, more adapted to the Breton music.

Widely credited with introducing the simple system wooden flute into Breton folk music and primarly responsible, through his intensive teaching efforts and hundreds of concerts and festivals appearances, for its enthusiastic adoption among many dozens of young musicians throughout Brittany, Jean-Michel has achieved widespread recognition as one of world’s premier traditional flute players.

Yvon Riou, guitar player from the coast of Tregor*, started with playing the open tuning (dadgad type), popularized in Brittany by guitarists like Soïg SIBÉRIL and Gilles LE BIGOT. He later developed his own very personal style of accompaniment, both sensitive and energetic, which makes him sound like no other.

Created in 1993, the duo Veillon-Riou was the first flute and guitar duo dedicated to Breton music, playing in innumerable festoù-noz* in Brittany, but also in concert with a repertoire extending to Irish & Scottish music and beyond. Jean-Michel & Yvon have toured extensively in Ireland (recording a live album – « Beo »  – at the Culturlann McAdam O Fiaich in Belfast) but also played in Poland, Italy, England, USA and Canada). Their new album « Deus an Aod d’ar Menez » just came out in march 2017.

The wonderful Michelle O’Brien (Fiddle) returns to Hollywood for the second concert of Music Under The Mountains 2017, Michelle has previously performed on several occassions in the village, aswell as facilitating fiddle masterclasses with students of the Laura Greaves Music Bursary. Michelles recordings include an album with concertina player Aogan Lynch and guitarist Gavin Ralston and later an album with the band Providence. In 2013 she recorded a duet album with the harpist Laoise Kelly entitled “The Wishing Well”, which was hailed as a must have.

Michelle will be joined on the night by Damien Mullane (Accordion). In a short space of time Damien has a built up musical CV that any veteran musician would be proud of. Damien has won numerous All-Ireland titles on both accordion and melodeon and began his professional career as the accordionist in the legendary Frankie Gavin’s band De Dannan. In 2012 Damien released his debut album ‘13’, on which he collaboration with some of Ireland’s leading exponents such as Donogh Hennessy, Zoe Conway, John Joe Kelly, Trevor Hutchinson, Dessie Kelliher, Pauline Scanlon and Éamonn de Barra.

We hope you will join us for this spectacular night of music in St. Kevin’s Church of Ireland on Friday September 22nd. Tickets are available at musicunderthemountains.com.

Michelle and Damien will also be facilitating workshops in St Kevin’s Community Centre on Saturday September 23rd at 10.30 am. The cost of the workshops is €10, for further details just contact us!

After their spectacular performance last year, we had to ask the guys to come back and so Music Under The Mountains is delighted to welcome I Draw Slow back to Hollywood! Following on from the release of their latest album, Turn Your Face To The Sun, I Draw Slow have had quite the busy summer touring all over the US and Ireland. The album itself has been subject to rave reviews from both sides of the Atlantic.

“Impressive roots, delivered with gusto and flair” – The Irish Times

“Whatever Americana scene there may be in Ireland, I Draw Slow have surely conquered it.” – The Sunday Times

This years concert will be particularly special as they will perform acoustically in St. Kevin’s Church in Hollywood, those of you who have been at such concerts in the church know that this will be something unmissable.

As is expected tickets are already selling fast! So book your tickets sooner rather than later at musicunderthemountains.com.

Stay in touch with us on facebook for festival information.

The acclaimed harpist of The Chieftains, Tríona Marshall will be joined by Scottish guitarist Tim Edey for a concert in St. Kevins Church of Ireland, Hollywood on July 10th to celebrate the launch of her new album “Between Two Ways”.

Check out Tríonas Facebook page for some videos and soundbites of what to expect on the night, this event is sure to be a treat made all the better by being held in such a unique venue as St. Kevins!

Doors for the concert open at 8.00PM, further information is available on our Facebook page or the event page. For queries on bookings or directions you can contact us through this site our message us on Facebook! 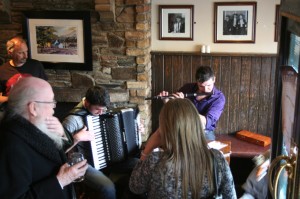 Four musicians from Brittany named “Hent” will be playing in the village over the weekend.