Mr Frankie Lane (as well as doing the sound & lighting for the nigh) put on a great one-man show in the Ardenode. He intro’s were full of his trademark dry humour (dobro with a fada!) and the singing and playing were totally satisfying, but what came across most strongly was his genuine respect and love for so many great Irish musicians whom he has played with down the years, his love of travel and cultural variety, and his intense relationship with the awesome American tradition.

Frankie putting on the voice of the slow-talking Gael Linn producer who would “have … to … come … back … to … you … in … a … week … or … so” about the idea of naming his album Resophonia. 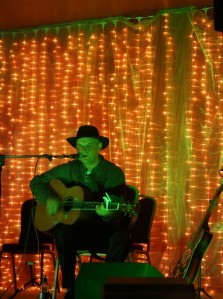